This section provides an overview of what aframe is, and why a developer might want to use it.

It should also mention any large subjects within aframe, and link out to the related topics. Since the Documentation for aframe is new, you may need to create initial versions of those related topics.

A-Frame can be developed from a plain HTML file without having to install anything! A great way to try out A-Frame to remix the starter example on Glitch, an online code editor that instantly hosts and deploys for free. Or create an .html file and include A-Frame in the head:

Include the JS Build

To include A-Frame into an HTML file, we drop a script tag pointing to the CDN build:

We can also install A-Frame through npm:

Then we can bundle A-Frame into our application. For example, with Browserify or Webpack:

If you use npm, you can use angle, a command line interface for A-Frame. angle can initialize a scene template with a single command:

Just drop in a script tag and a-scene. A-Frame will handle 3D boilerplate, VR setup, and default controls. Nothing to install, no build steps.

HTML is easy to read, understand, and copy-and-paste. Being based on top of HTML, A-Frame is accessible to everyone: web developers, VR enthusiasts, artists, designers, educators, makers, kids.

Build VR applications for Vive, Rift, Daydream, GearVR, and Cardboard with support for all respective controllers. Don’t have a headset or controllers? No problem! A-Frame still works on standard desktop and smartphones.

A-Frame is a powerful three.js framework, providing a declarative, composable, reusable entity-component structure.js. HTML is just the tip of the iceberg; developers have unlimited access to JavaScript, DOM APIs, three.js, WebVR, and WebGL.

A-Frame is optimized from the ground up for WebVR. While A-Frame uses the DOM, its elements don’t touch the browser layout engine. 3D object updates are all done in memory with little overhead under a single requestAnimationFrame call. For reference, see A-Painter, a Tilt Brush clone built in A-Frame that runs like native (90+ FPS).

Since the Web was built on the notion of the HTML, A-Frame is compatible with most libraries, frameworks, and tools including React, Preact, Vue.js, Angular, d3.js, Ember.js, jQuery.

A-Frame provides a handy built-in visual 3D inspector. Open up any A-Frame scene, hit ctrl + alt + i, and fly around to peek behind the hood! 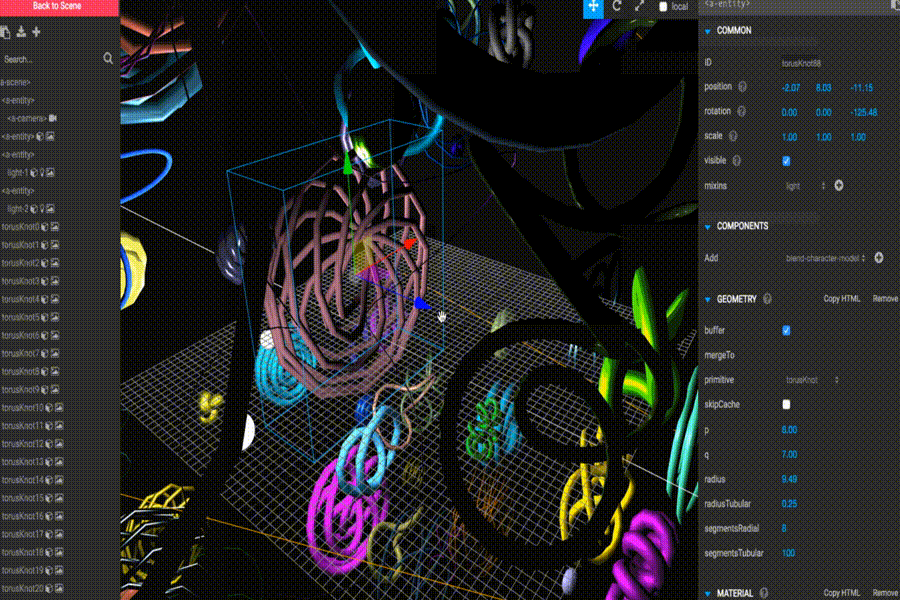 Take powerful components that developers have published and plug them in straight from HTML. Similar to the Unity Asset Store, the A-Frame Registry collects and curates these components for easy discovery.

Getting started for AR